Ferminet Model for deepchem
I had the opportunity of being a Google Summer of Code contributor with DeepChem (Open Chemistry), an open-source organization aiming to provide deep learning tools for drug-discovery, material science, quantum chemistry, etc.

Overview & Background Information:
In this post I aim to summarize the work that I have carried for the past 5 months (Jun-Oct).
The aim of my project was to add the the model Ferminet, which aims to predict Ab-initio(without any external data) solutions of multi-electron wave functions as accurately as possible using fewer computations. The quantum mechanical solution of molecular systems can give the ground state energy and other physical properties of a molecule like ionization, electron affinity all from computer simulation, which can save time and effort!! .

The electrons in a molecule are quantum mechanical in nature, meaning they do not follow classical physical laws. Quantum mechanics only gives a probability of where the electrons will be found and will not tell exactly where it can be found. This probability is given by the squared magnitude of a property of molecule system called the wave function and is different in each case of different molecule.These calculations are done by calculating a quantum mechanical property of the molecule system called the wave-function

For many purposes, the nuclei of the atoms in a molecule can be considered to be stationary, and then we solve to get the wave-function of the electrons. The probabilities, when modeled into 3 dimensional space, take the shape of the orbitals. Like shown in these images below which is taken via electron microscope. 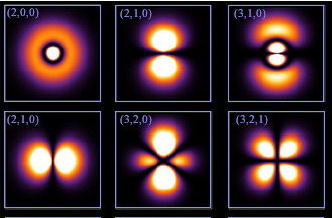 (source: Google Images)
From the top left, orbitals in order - 2s, 2p(y),3p(y),2p(x),3d(z^2),3d(x^2-y^2))
(Don’t worry if you cannot remember or relate to the concept of orbitals, just remember that these are the space where electrons are found with more probability. If you want to dig deep, I would recommend checking this great resource out. )

Presently there are many methods for the wave-function calculation, each method has its own tradeoff between the accuracy of the solution and the time complexity. Typically, the complexity of all the algorithms depend on the total number of electrons and nuclei as there will be more electron-electron and electron-nucleus interaction to be taken in account for. One such method is the Hartree-Fock, which is a very popular algorithm for approximating the wave-function in less time by ignoring the electron-electron interactions. There is also a class of algorithms which operate on the solutions of Hartree-Fock as the baseline and incorporate the missing electron-electron interactions to make it more accurate.

Ferminet uses DNNs to approximate one-such “post Hartree-Fock ‘’ method called the Variational Monte Carlo. In short, Variational Monte Carlo(VMC) samples electrons from Markov-Chain Monte Carlo(MCMC) initially via a normal distribution around the nuclei and then calculates the wavefunction, which is then again fed into the MCMC sampler to sample electrons improving the electrons’ coordinates in each iteration of the loop, aiming to minimize the ground state energy of the system(least possible energy system will be the most stable ground state molecule). In ferminet we use this same procedure, but use DNNs to approximate the wavefunction whose weights are changed from using the energy of the system as loss in each iteration of training. All this from using only the coordinates of the nuclei of the molecules as the only input.

Thus I have divided my project into the following sub-parts, implementing them one by one:-

Special thanks to Chaoqi Wang(https://github.com/alecwangcq), as much of the code was inspired from his pytorch implementation of KFAC.

Future Changes and scope for improvement:
The electron initialization for the sampling is right now done on the basis of the most electronegative atom in a molecule, but this leads to a problem when there are multiple charges and multiple atoms of the same element. To tackle this problem, one can use the partial charges computed from the Hartree-Fock calculation which can also be done using PySCF.

Another scope of improvement can arise from the integrating some of the features of Paulinet(https://arxiv.org/abs/1909.08423) , which incorporates the physical boundary condition of the orbitals, this can further significantly improve the speed of the model with a very little compromise on the accuracy.

Other types of sampling methods like Hamiltonian Monte Carlo can also be tried and tested out.

Also, I am planning to write a Colab tutorial on the usage of the Ferminet model, which I will post in the below thread once complete!

Acknowledgement:
Thanks to my mentors- Tony Davis and Dr. Peter Eastman, for helping throughout my project and supervising it. Thanks to Dr. Bharath Ramsundar for his advice when I got stuck at some points. Special thanks to Dr. David Pfau from Deepmind (One of the authors of Ferminet ) for his clarifications and discussions about the model.

Edit: Updating for Shai since he doesn’t have forum credit to make edits yet